Popular Homecraft celebrated two decades of publication -- in 1931, PH prided itself as being the first "home craftsman" magazine -- with an impressive set of graphs, below. (I am gratified to Philip Harrison for supplying the circulation data of Popular Homecraft.)

In 1949, Home Craftsman published a  selection of Lester Margon's articles in book format, Construction of American Furniture Treasures. (A "corrected edition" was issued by Dover Press in 1975).

(With obvious pride, amateur woodworkers' letters -- with photos -- to the Home Craftsman, give details about successfully reconstructing the examples of classic American furniture illustrated by Lester Margon.)

In 1950, Home Craftsman Publishing Corp. published in book form Herman Hjorth's the 18 articles from the 1949-1950 issues of HC, under the title, How to Operate Your Power Tools. In my view, in there time, these articles achieved -- and still do -- a high standard of excellence, for assisting wannabe woodworkers to buy the tools needed to furnish the homeshops they were creating in their basements or garages.

However -- and I'd like to know precisely why -- because, when the book came out, Hjorth's contributions were not acknowledged -- his name does not appear anywhere, and the preface notes that the book was supervised in its production by Harry J Hobbs, following the suggestion of Arthur Wakeling, who are, respectively, editor/publisher and consulting editor.

The "hand router", though, is the main focus of Hjorth's article. That it was written in the late 1940s is, I think, telling, as routers themselves came into the market in ?, and were not purchased by amateur woodworkers until 19?? -- I will follow up on this elusive data. (The image below is my "dome-topped" router -- date not known, but resembles the images of dome-tops used by Hjorth and Gunerman.)

Hjorth's article on the router, as it appears reprinted in Gunerman's How to Operate Your Power Tools

In 1949, with the 18th volume, The Deltagram could, in rertrospect look back over a remarkable achievement. boast that its 2,240 pages. However, why was The Deltagram obviously having problems?

(At the moment, my evidence of these these problems is not much more than hunches -- if you're curious, please look for more info in the future.)

In part, I think, the answer rests in the fact that a chemistry of change was in the air in the post-World War II era. For example, check out the fact -- brought to us courtesy of The Deltagram itself -- that at least 15 other magazines existed with content actively promoting woodworking.

Shopsmith and Dewalt put on the market for home workshops some power tools that captured the imaginations of amateur woodworkers: Shopsmiths were being marketed by such national chains as Montgomery Ward, and gave the purchaser a combaintion tool for les than $300.00. A domesticated Dewalt radial arm saw was released. Even Delta itself released in the late 1940s its "Delta Multiplex" radial arm saw, although it is never featured on pages of The Deltagram in the 1940s. (Click here for the background in chapter 6:5.)


Delta Machinery's The Deltagram ended the decade with volume 18.

Edited by the veteran author of wooderker's manuals, Ed Hamilton, this section was later issued by Delta as a separate booklet, a 56-page How to Plan a Workshop

. (I have not seen the 32-page booklet by the same title was Orignally issued separately booklet in 1936.)

Shopsmith Shavings was first launched as Shopsmith's house organ in 1948, Initially, its title was ShopNotes. In 1948 (and probably into 1949) three issues were published.

[am looking at an article august 1942 on woodworking which features the basement shop of an Englewood NJ resident, G V Fuller], and some plans designed by H R Batchelor, J Julius Fanta, Douglas Lockwood, Betty Vaughan. and John Gerald Shea

This is the magazine that published several articles by Walt Durbahn

Books issued by Popular Mechanics included Forty Power Tools You Can Make, with printings issued in 1941, 1943, 1944, and 1948; Power Tools and How to Use Them (1950);  and How to Get the Most Out of Your Homeworkshop With Hand and Power Tools

John Gerald Shea's 1944 Woodworking for Everybody. Shea had the high school in mind for the 1944 edition -- it was created as a text for woodworking in General Shop courses --  but subsequent editions (there were three, very successful ones) directed toward the home woodworker. More details given on each of these manuals in [link needed] Woodworker's Manuals 1941-1950.

For statistics on numbers of woodworker's manuals published decade by decade, see manuals access page.  More and more frequently, copies of woodworker's manuals are being digitized and uploaded to the Internet by Google Books. I try to keep up with these events, and indicate appropriately the titles of woodworker's manuals that can be read on the Web, but it is a large job, so I ask that readers inform me if they encounter web-based manuals. Obviously the impact of World War II on both America and Canada -- I am a native of Canada, but have lived in America since 1960 -- was virtually immeasurable, issues that I touch on in a variety of ways. 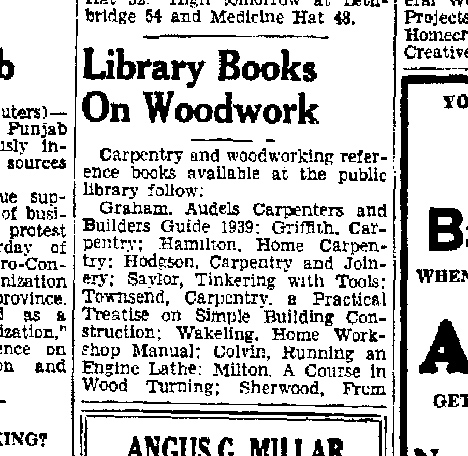 On the left, for example, is a (partial) list of books on woodworking, recommended by the Lethbridge (Alberta) Public Library in 1947. This list was published in the Lethbridge Herald,  March 20 on page 6.

For more this matter, click here to read the information that I have gathered so far. Below, in the gray- shaded box, is a brief list of the 29 books.